About the Kingdom Race

The race that has raised and donated almost R500 000 to Bible production, translation and distribution over the last 7 years. In terms of Bibles it is equal to 8000 Bibles. This would not have been possible without each and every participant, athlete and donor that supported the Run & Walk 4 Bibles. Thank you so much for your heart for the kingdom!
Meet The Organising Team

Hitory of the Race

2012 - A kerksondermure cell group in Centurion, "Cell for Christ", created an event that would further the translation, production and distribution of Bibles. The initiative had a humble start on 9 August 2016 as a walk event for teams and individuals around the Zwartkop High School athletics track. The "Cell for Christ" sponsored the first event and donated R3 000 for Bibles to the Bible Society of South Africa.

2013 – Due to great demand Run & Walk 4 Bibles included a 5 km, 10 km and walk around the Zwartkop High School athletics track (for teams and individuals). With the assistance Alpha Centurion Runners and Walkers (ACRW) the 5 km and 10 km event were organised in the streets near Zwartkop High School. The organising committee then involved four church denominations in Centurion. The attendance and eventual outcome grew and an amount of
R22 000 was donated to the Bible Society of South Africa. The organising committee knew it was time to make it an official AGN event.

2014 – A half marathon (21 km) was added to the existing walking and running distances. The walk around the track (teams and individuals) also took place after the AGN race. With more than 1500 participants, and with the support of regular individual sponsorships, it was possible to donate R52 000 to the Bible Society of South Africa.

2015 –The event caught the interest of local church and business sectors. Their involvement attracted many more volunteers and much needed financial support. The fourth Run & Walk 4 Bibles developed into a much bigger, successful race with almost 2000 runners. This was the first year that the race could carry all its own expenses and donated R84 000 for Bible translation and distribution.

2016 - In honour of four-time Comrades Marathon gold medalist and marathon runner Riana van Niekerk, who lost her battle with cancer in February 2016, the race became known as the Riana van Niekerk Run & Walk 4 Bibles. Comrades Marathon winner 2016 Charné Bosman personally promoted the race, supported some runners to complete the 10 km race under 45 minutes, and awarded the medals to all winners of the different distances. 3000 runners and walkers participated and all own expenses were carried. R100 000 was donated to the Bible Society of South Africa.

​Adding needy athletes to the beneficiaries of the race, a community project was initiated providing running shoes, sweatshirts, caps, scarves and T-shirts.  The public donated cash and new or second-hand running gear to be distributed. This community upliftment initiative was done in cooperation with kerksondermure, ALPHA Centurion Runners and Walkers (ACRW), Zwartkop High School, Sportsmans Warehouse, The Bible Society of South Africa, Ijaba Security, Monitor Net, NG Sesmylspruit and Radio Pulpit, and is now an integral part of the event.

Did you know? Currently the shortage per Bible is R45. This means that in practice, each Bible that is distributed by the Bible Society is done so at a loss of R45 per Bible. This includes the manufacturing and delivery costs. The outreach Bible currently costs R45 and the standard Bible R79. Each person that contributes towards this cause, ensures that the Bible Society recovers the loss and enables the possibility for Bibles to still be affordable and available for distribution.

Last year was a record year for Bible translation. In 2014, Bible Societies throughout the world were involved in completing translations in 51 languages. The complete Bible is now available in 542 languages, the New Testament in 1324 and at least one book of the Bible is available in a further 1020 languages. However, there are still about 4015 languages spoken by 460 million people who still have no part of the Bible in their heart language at all.

The Bible Society’s literacy project aims to promote basic literacy, as well as Bible literacy, among all age groups through Bible-based literacy material. Thousands of children in poor areas are not exposed to literacy in the same way as privileged children and they often start their school careers at a disadvantage. The two booklets, My first Bible Do and Learn Book and My 2nd Bible Do and Learn Book, are available in English and Afrikaans, and work is also underway to develop the series in isiXhosa with isiZulu to follow. In 2014, more than 37 000 children and adults received these Bible-based literacy books.

The "Bibles for grade 7's"-project aims to make Bibles available free of charge to grade 7 learners in schools in the poorest parts of our country. There are more than 25 000 government schools in South Africa  ̶̶̶̶̶  22 938 of these do not have stocked libraries, while 19 541 do not even have a space for a library.

Grade 7 learners can read with understanding. They are at the start of their teenage years and are especially impressionable. The Bible message can help to establish a value system which will assist them in making the right choices. In 2014 some 43 627 grade 7's in schools in poor areas received a Bible.

18 June 1976 - † 13 Februarie 2016
​Riana was to most an inspiring athlete. She was, amongst others, four times a Comrades gold medalist, six times winner of the Om die Dam marathon and three times winner of the Two Oceans. Riana was a committed, hardworking ultra-distance athlete who ran every race to win. Her determination and drive was evident in her performances. Yet, she remained humble and a person with immense integrity. 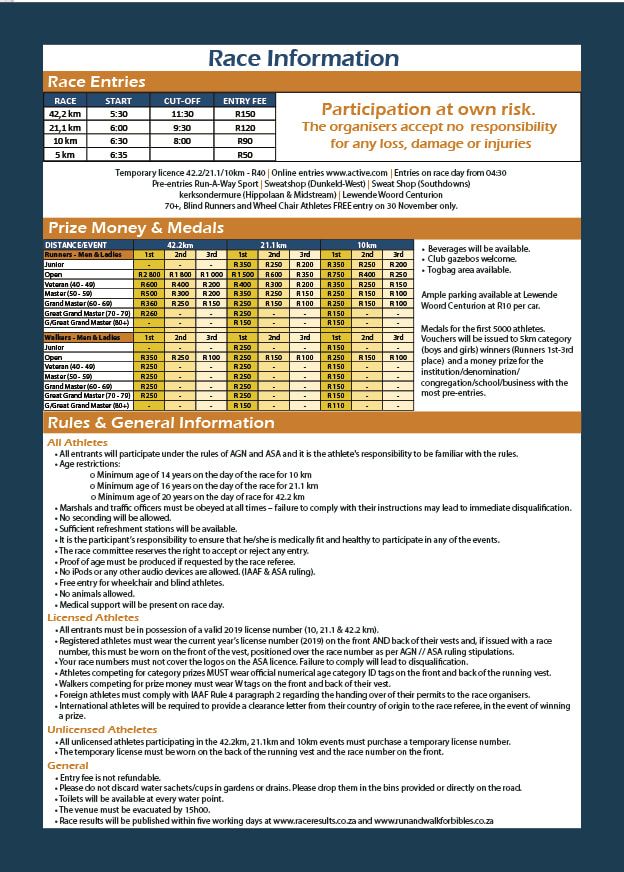